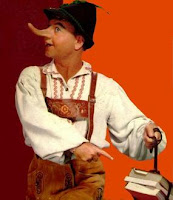 Check out Pinocchio (1957) on Podomatic.

On October 13, 1957 - 50 years ago today - NBC aired a live, nationally-televised production of Pinocchio featuring music composed by Alec Wilder. It is widely considered one of the classics from "the Golden Age of Television".

Wilderworld recently asked Pinocchio lyricist William Engvick to share his recollections of the production. Here is what he related...

A video or DVD of the Pinocchio broadcast has never been released commercially, although a kinescope copy of it exists at the New York Public Library for the Performing Arts.