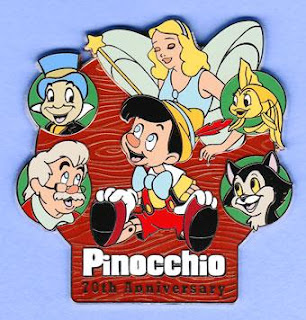 Pinocchio and cast are featured on this 70th Anniversay pin. The pin includes Geppetto, Jimmy The Cricket, The Blue Fairy, Cleo and Figaro. This pin is part of a series pins Disney put out for with Disney Character celebrating the anniversary of their movies release. See my other listings to combine shipping on Disney pins. This is a Limited Edition pin of 200, gold finished, enamel cloisonne. The pin measures 3 " High by 2 7/8" Wide. It is Disney SKU #507875P released on Feb. 1, 2010, by Disney Direct.
at 7:43 PM