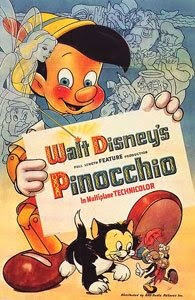 Disney has announced that one of the first titles that they will release on the new Blu-Ray HD DVD format will be their animation classic: Pinocchio.

See At Disney, Blu-ray Sales Team Is a Cast of Characters.

"The company will release five “platinum” titles from its library in the Blu-ray format over the next two years, hoping that classic animated movies will spur wider interest.

The films are “Pinocchio,” “Snow White and the Seven Dwarfs,” “Fantasia,” “Fantasia 2000” and “Beauty and the Beast.” The company had previously announced plans to introduce one such title, “Sleeping Beauty.”

All the DVDs will include unusual features geared toward a generation that embraces interactivity and social networking. Viewers can watch a movie in tandem with friends in other locations, while they chat using a laptop or cellphone (the comments appear on the screen).

Viewers will also be able to compete against others around the world at trivia or send what Disney is calling movie mail, video images of themselves that appear within the context of the movie.

Such activities are possible because of a technology called BD Live that connects Blu-ray discs with the Internet...

...Disney needs all the muscle it can find. Sales of Blu-ray players have been disappointing — although the industry has big hopes for the coming holiday season — and players compatible with BD Live just became available a few months ago.

They are also expensive: Blu-ray players that function with BD Live are priced from $300 to $700, much more than regular Blu-ray machines.

Making DVDs exciting is a trick that movie studios are desperate to pull off. After years of blistering growth, domestic DVD sales fell 3.2 percent last year, to $15.9 billion, the first annual drop in the medium’s history, according to Adams Media Research.

Blu-ray sales are growing fast, but still represent a tiny part of the business. The industry estimate for sales of Blu-ray discs in 2008 is nearly $1 billion, up from $170 million last year."

I'll be getting a copy at some point for the collection... But even as a rabid Pinoc Collector, I know that the Blu-Ray player has got to come first...
at 4:49 PM