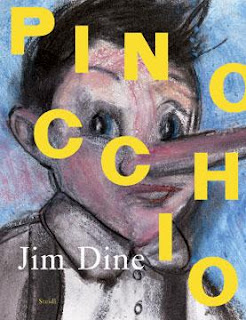 Pinocchio has long been a significant motif in Jim Dine's work: this book is his illustrated version of Collodi's original, dark story. Exploring the hard realities of life far from the traditional world of fairy tales, the allegory, satire and black humor of Pinocchio are brought to life in Dine's graphic drawings.
Item nr. 120966 $ 50.00

The original art works for this book are featured in an exhibition at the New York Public Library, as part of their Spencer Collection. 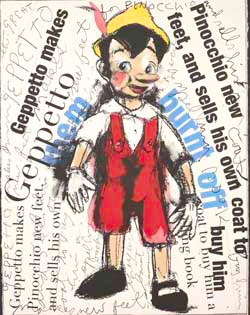 A promised gift of 39 hand-colored lithographs by the artist Jim Dine is being celebrated with an exhibition at The New York Public Library beginning December 6, 2006. A dynamic presence in the art world for more than four decades, Dine has devoted the last three years to a personal interpretation of a story that has engaged and intrigued him for much of his life, Carlo Collodi's Pinocchio. In these 39 prints, reproduced in a new edition of Pinocchio published by Steidl, Dine has made his own the tale of the temptations, trials, tribulations, and ultimate triumph of this mischievous but endearing wooden boy. This exhibition celebrates Dine's promised gift of these lithographs to the Library's Spencer Collection. Jim Dine's Pinocchio is on view in the North Gallery on the third floor of the Humanities and Social Sciences Library located at Fifth Avenue and 42nd Street. Admission is free.

A painter, printmaker, sculptor, photographer, performance artist and poet, Dine writes about his fascination with Pinocchio in the introduction to the Steidl edition: "Thanks to Carlo Collodi, the real creator of Pinocchio, I have for many years been able to live through the wooden boy. His ability to hold the metaphor in limitless ways has made my drawings, paintings and sculpture of him richer by far. His poor burned feet, his misguided judgment, his vanity about his large nose, his temporary donkey ears all add up to the real sum of his parts. In the end, it is his great heart that holds me. I have carried him on my back like a landscape since I was six years old. Sixty-four years is a long time to get to know someone, yet his depth and secrets are endless. This book is for the Boy." Dine perceives that "this idea of a talking stick becoming a boy, it's like a metaphor for art, and it's the ultimate alchemical transformation." His Geppetto is a self-portrait, alluding to the artist as creator, who in giving life has a connection with the Divine.

Words and phrases, objects in themselves, have been an ongoing subject in Dine's art; here those words and phrases are Collodi's. Initially issued as a serial, Pinocchio was first published in book form in 1883 as Le avventure di Pinocchio [The Adventures of Pinocchio]. Each chapter is preceded by a synopsis, and Dine quotes in his book from those individual introductions, the words woven together with his images, which include such personal icons as a gnarled, ancient tree, a crow and an owl, and a self-portrait, all given fresh meaning in a new context. The cat and the ape, favorite subjects of Dine's in recent years, inspired by a 19th-century porcelain figurine, have been transformed into the malevolent cat and fox, who dupe the naughty but naive Pinocchio. This promised gift is the most recent in a series of gifts to the Spencer Collection from Jim Dine, documenting his extraordinary career as an artist of the book. Pinocchio by Carlo Collodi, Jim Dine, translated by M.A. Murray (Göttingen: Steidl, 2006), is available for purchase in the Library Shop or at www.libraryshop.org.

About The Spencer Collection

The Spencer Collection of Illustrated Books, Manuscripts, and Fine Bindings was established by the bequest of the American expatriate collector William Augustus Spencer, who died aboard the Titanic in 1912. Along with his personal collection of 232 primarily French nineteenth-century illustrated and sumptuously bound books, the gift included a generous endowment fund and a directive to acquire the finest illustrated books and manuscripts produced in any country, language, or period. Today the Spencer Collection comprises more than 10,000 objects and surveys the illustrated word and beautiful bindings from medieval manuscripts, Japanese scrolls, Islamic manuscripts, and Indian miniatures to contemporary livres d'artistes.
at 5:11 AM